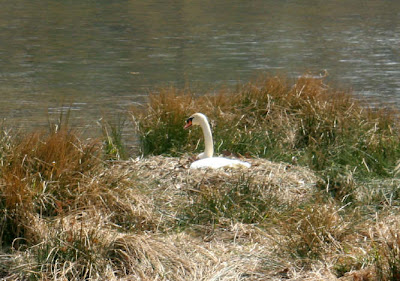 Love is in the air! Mrs. Swan in on the nest! The nest appears to be about 4 feet in diameter and is located on an island area at the north end of Sweetwater Lake caused by the flood of June 2008. Mr. Swan is very territorial. A nearby resident reports that he witnessed Mr. Swan chasing after a swimming deer! They have also shown some aggression towards approaching boats. Update (4/9/2010): A 2 inch rain on Wednesday night (4/7/2010) caused Sweetwater to flood. The nest appears to have survived but Mrs. Swan is no longer sitting on the nest. I got close enough to take a picture and noted that there were no eggs visible in the nest. The two swans also seem less protective than before. Update (2/25/2010) For the past week, Mrs. Swan has been back on the nest. One day, I saw both birds on the nest. They have become very territorial again charging after boats and geese. The conservancy workers installed a buoy marked "nesting swans" to warn boats entering the danger zone!
Posted by Dave Jarrett at 8:37 PM